The Turkish Plastics Industry Foundation (PAGEV) held its ordinary general assembly and elections. Yavuz Eroğlu, who has played a critical part in resolving the issues of the industry and manufacturers, was re-elected President in the general assembly elections with the largest turnout to date. Calling all industry stakeholders to joint action, Eroğlu said, “There is strength in unity. We are prepared, as we always have been, to work together with all stakeholders to grow our industry and ensure that our problems are solved.”

The Turkish Plastics Industry Foundation (PAGEV) held its 30th ordinary general assembly where a President, a Vice-President and three new Board of Directors Members were elected. The assembly and elections took place at the Istanbul Hilton Bomonti Hotel with the largest turnout in the history of PAGEV, and the incumbent president Yavuz Eroğlu was re-elected unanimously as the only candidate. Turkish Plastics Industry with a converting capacity of appr. 10 million tons of plastics products annualy is the second largest capacity in European continent after Germany and sixth largest capacity gloablly. 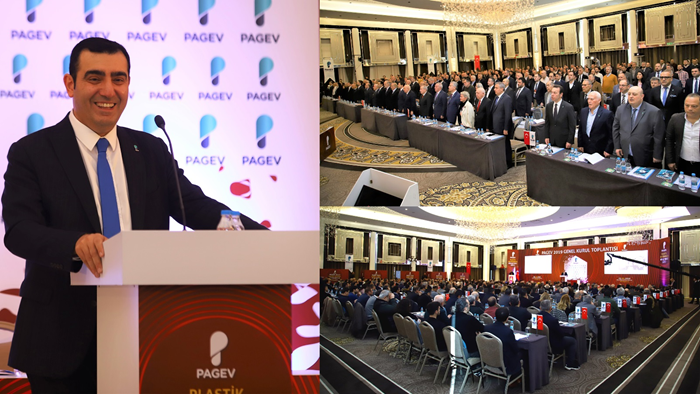 Stepping up to the Presidency of PAGEV for the third time, Yavuz Eroğlu emphasized unity in his speech at the general assembly, saying, “Our priority at PAGEV is to help advance our industry by removing obstacles to growth. Throughout my presidency, the Board of Directors and I kept this at the top of our agenda. Moving forward, we will strive to help our industry grow and eliminate setbacks we have on a macroeconomic level. I am well aware of the responsibility my colleagues and I have undertaken with our unanimous election in what happened to be the largest turnout to an election in the 30 years of PAGEV.”

Speaking in the general assembly, PAGEV member and Istanbul Chamber of Commerce Chair Şekib Avdagiç said, “Plastics has to be the only material that is under so much undeserved attack despite having such positive contributions to our life. PAGEV strives to educate the public in this matter. We will continue to work towards removing all barriers to the growth of our economy and plastics in particular.”

PAGEV’s Founding Honorary President Muammer Yüceler also spoke at the assembly, saying, “We put in a great deal of effort to create this foundation, and Yavuz Eroğlu has been doing extraordinary work since he took over the helm. We are in full support of his outstanding efforts.”

Explaining that they would lose no time in getting on with their work, Yavuz Eroğlu said, “First and foremost, we intend to dispel the myth that plastic is an enemy of the environment. We will not allow unscientific arguments to destroy our nature and economy. At PAGEV, we will put even greater effort into recycling in 2020, and take additional steps towards building a recycling economy in Turkey. We will educate the society about what plastics bring to our life. We know that plastics are far from being a threat to nature: they are capable of being recycled and reused over and over, becoming worth their weight in gold. We will continue the ‘Plastics have a great place in life but no place in nature’ campaign that launched nationwide on TV, radio and digital platforms on December 3, 2019, and extend our outreach.”

Eroğlu concluded by thanking all elected members and industry representatives for attending the general assembly, and expressed his hope that strength through unity in PAGEV would continue to grow into the future.

PAGEV Board of Directors composition after the 2020 General Assembly: