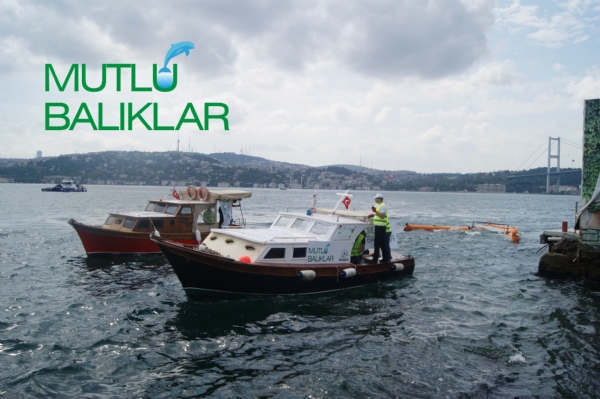 MEP Alain Cadec opened the conference by rightly stating that, in the fight against marine litter, “it is crucial to collaborate with fishermen as they are best equipped to collect floating debris”. Bernard Merkx, Co-Founder of Waste Free Oceans, discussed the need to determine marine litter hotspots, that is, where there is a regular accumulation of litter due to natural or human causes. Fishing for litter is not to be carried out in a “random” manner but must be optimized by targeting hotspots.

The President of MEA&Turkey for WFO Yavuz Eroğlu explained in his speech: "The marine litter is an international problem; marine litters may be carried from one country to another on the waves. For this reason, what we need is an international collaboration to solve this problem. EU funds flowing to the EU states is not a solution; environment projects from Turkey and other countries in the region should be supported with these funds too."

Ms. Elisa Roller of the European Commission’s Directorate-General for Maritime Affairs and Fisheries (DG MARE) stressed the fact that there remains a lack of awareness of the funds made available by the European Institutions to support the collection of waste by fishermen. Ms. Roller is the Head of Unit for Structural Policy and Economic Analysis at DG MARE and assured that marine litter will be part of the Circular Economy Package which the Commission is scheduled to release by the end of 2015. Ms. Roller said that “potentially valuable materials should be pumped back into the economy instead of polluting beaches and damaging the environment”.

Massimo Bellavista, President of Bellaria Pesca Producers Organization and Italian Member of Europêche, presented the European Project ECOADRIA-FISHERMAN, which, following the European guidelines on Blue Growth and the European Strategy for the Adriatic and Ionian Sea, actively involves fishermen of the region. The pilot project gives local fisherman a leading role in managing sea activities and raising awareness on marine litter problems in the area. A mobile application was specially created to easily notify and alert fishermen and the community of marine litter problems in the area.

Nicole Intemann, author of Plastian the Little Fish, told the heart-warming story of how she came about to writing a children’s book on the problem of marine litter. WFO recently partnered with Ms. Intemann in order to raise awareness on the issue of marine litter and to educate children aged five to ten of the problem and its solutions. The conference officially launched the book and is set for worldwide distribution with the hopes of inspiring children to build for a future where the oceans are waste free.

MEP Ricardo Serrão Santos, who also spoke at the conference, is a Member of the Fisheries Committee and highly dedicated to our oceans and is working to protect marine life. MEP Mr. Santos brought to light the many other pollutants affecting the state of the oceans.

During the debate that followed the presentations, it was further highlighted that fishermen should not have to pay when unloading at ports the waste collected when either actively or passively fishing for litter. Unfortunately, this is not the reality of today and harmonized measures should be put in place.

MEP Alain Cadec concluded that WFO offers a remarkable example of collaborating with fishermen for their knowledge and capabilities, as well as developing a true circular economy that adds value to waste.

Waste Free Oceans (WFO) is a ground breaking public-private Foundation aimed at mobilizing and uniting the fisheries sector, public authorities and the international plastics industry in combating the growing issue of floating litter on the coastlines, at the rivers and in the seas. The Chairman of Executive Board of PAGEV Yavuz EROĞLU has been holding the regional presidency of the project in Turkey since 2012. Various projects have been launched since 2011 and receive the full support of MEP Alain Cadec, Chair of the European Parliament’s Committee on Fisheries and WFO Champion.