The latest market report of PAGEV' is published on the www.plasticsnewseurope.com. The news text is in the following:

In the first six months of 2016, Turkey’s plastics output expanded to some 4.6 million tonnes, an increase of 8% compared with the same period a year earlier, according to the latest market report by the Turkish Plastics Industry Foundation (PAGEV).

The industry’s output in this period was estimated to be worth about $17.8bn (€16.1bn), the report said. This represented an increase of 8.5% compared with the first half of 2015.

Turkey’s plastics output in the first six months of this year was dominated by packaging products which totalled 1.85 million tonnes. A further 1.02 million tonnes of plastics were supplied to the construction industry, according to the industry association.

With the aim to expand and modernise their output capacities, local plastics industry players invested a total of $443m (€400m) in the first six months of 2016. PAGEV expects that, by the end of this year, the companies will invest an aggregate $886m (€800m) in their manufacturing capacities.

From January to June 2016, the largest share of Turkish plastics exports was intended for Iraq, at 89,000 tonnes. Germany and the UK were ranked second and third, with exports of 49,000 tonnes and 40,000 tonnes, respectively.

Set up in 1989 and headquartered in Turkey’s largest city Istanbul, PAGEV says it represents the interests of more than 300 companies active in the country’s plastics industry. 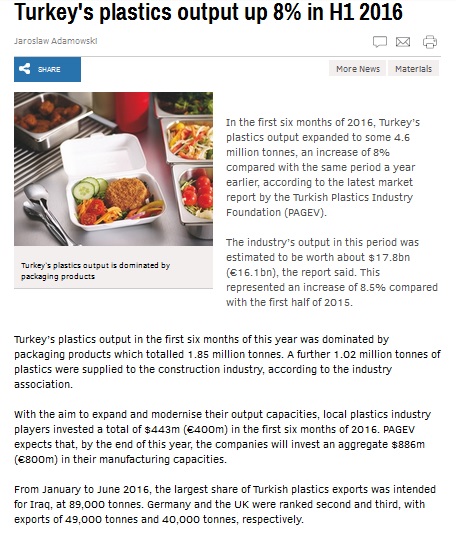