Experts warning against coronavirus infection: "Reusable cloth and mesh bags may be carriers of the virus, so single-use hygienic bags should be used." Yalova University Polymer Engineering Department Head Professor Mustafa Öksüz said that consumers must be aware of hygiene rules when shopping, and shared striking results from recent surveys.

As the coronavirus and resulting Covid-19 pandemic ravage the world, killing tens of thousands of people and overloading intensive care units, the scientific community and academics have been issuing warnings in quick succession. Experts remind the people that the lethal virus has been classified as a pandemic by the World Health Organization due to its genetic properties, and call for people to take the right precautions.

Emphasizing the need for individual protection and observance of hygiene rules in everyday life to assist with the measures implemented by public authorities, Professor Mustafa Öksüz said, “Scientific research shows that reusable cloth or mesh bags used for shopping have the risk of carrying infection from home to supermarket or vice versa. Therefore, consumers should opt for disposable plastic carrier bags instead of reusable cloth or mesh bags that are infection threats these days."

Reminding the measures being taken across the world to protect against Covid-19, Professor Öksüz continued: “For example, Starbucks in the UK has stopped accepting personal cups and serves all customers in disposable cups. On the other hand, reusable carrier bags pose a significant hazard as they can carry viruses and bacteria from home to the store, or vice versa. Studies on reusable cloth and mesh bags have produced alarming results. The risk of infection had been clearly shown in a study published in Journal of Environmental Health in 2018. The researchers, led by Ryan Sinclair of the Loma Linda University School of Public Health, sent shoppers into three California grocery stores carrying polypropylene plastic tote bags that had been sprayed with a harmless surrogate of a virus. After the shoppers bought groceries and checked out, the researchers found sufficiently high traces of the surrogate to risk transmission on the hands of the shoppers and checkout clerks, as well as on many surfaces touched by the shoppers, including packaged food, unpackaged produce, shopping carts, checkout counters, and the touch screens used to pay for groceries. The researchers said that the results warranted the adaptation of “in-store hand hygiene” and “surface disinfection” by merchants, and they also recommended educating shoppers to wash their bags. 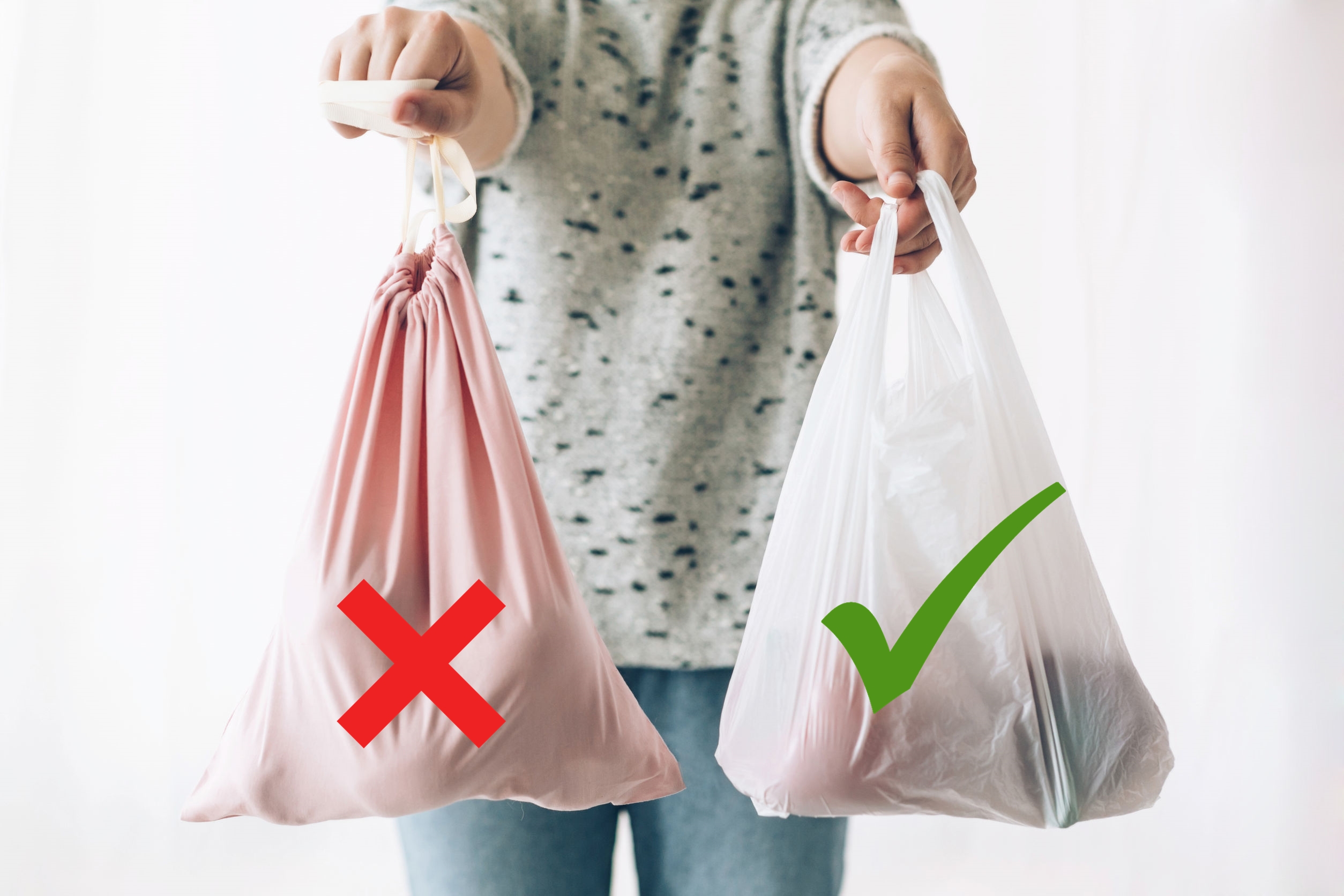 Noting that the results of research in the US were not in favor of reusable cloth and mesh bags, Professor Öksüz concluded: "An earlier study of supermarkets in Arizona and California found large numbers of bacteria in almost all the reusable bags—and no contamination in any of the new single-use plastic bags. When a bag with meat juice on the interior was stored in the trunk of a car, within two hours the number of bacteria multiplied tenfold. The researchers also found that the vast majority of shoppers never followed the advice to wash their bags. One of the researchers, Charles Gerba of the University of Arizona, said that the findings “suggest a serious threat to public health,” particularly from fecal coliform bacteria, which was found in half the bags. These bacteria and other pathogens can be transferred from raw meat in the bag and also from other sources. An outbreak of viral gastroenteritis among a girls’ soccer team in Oregon was traced to a resuable grocery bag that had sat on the floor of a hotel bathroom. In a 2012 study, researchers analyzed the effects of San Francisco’s ban on single-use plastic grocery bags by comparing emergency-room admissions in the city against those of nearby counties without the bag ban. The researchers, Jonathan Klick of the University of Pennsylvania and Joshua Wright of George Mason University, reported a 25 percent increase in bacteria-related illnesses and deaths in San Francisco relative to the other counties. The city’s Department of Public Health disputed the findings and methodology but acknowledged that “the idea that widespread use of reusable bags may cause gastrointenstinal infections if they are not regularly cleaned is plausible.”"